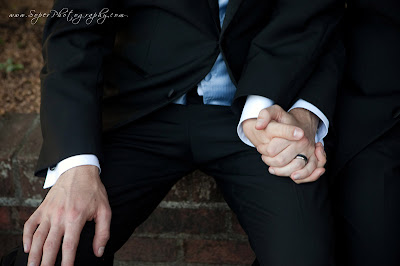 As I sit down to write this blog, the one thing that I keep remembering about Andy and Brian’s wedding is that at the end of the night I simply did not want to leave. When all was said and done, the rainbow bears had been tossed, the dancing train had pulled into the station, and several hilariously embarrassing slides of Young Andy had been shown, they let me know that while I was welcome to stay, my job was officially done. It took me another hour to convince myself I really needed to get home.

From the day I met Andy and Brian, I knew we were going to have a great time together. Leading up to their wedding day we’d already shared beer, pizza, and time with their cats Alex and Pete. They both have a great sense of humor, are highly organized, and love their kitties. What more could a girl ask for?

The day of the wedding we all met up at Lincoln Park for some quick family photos, then grabbed the whole wedding party for a trek down to the beach and Andy showed us all how push ups are done at Notre Dame. It was then time to head over to the Hall at Fauntleroy for a few quick pics of the hall before the ceremony started.
While brief, their ceremony was wonderfully heartfelt and personal. The part that moved me most was Kyle’s reading of the following excerpt from a ruling by Massachusetts Supreme Court Chief Justice Margaret H. Marshall:

“Marriage is a vital social institution. The exclusive commitment of two individuals to each other nurtures love and mutual support; it brings stability to our society. For those who choose to marry, and for their children, marriage provides an abundance of legal, financial, and social benefits. In return it imposes weighty legal, financial, and social obligations. Without question, civil marriage enhances the welfare of the community. It is a social institution of the highest importance.
Marriage also bestows enormous private and social advantages on those who choose to marry. Civil marriage is at once a deeply personal commitment to another human being and a highly public celebration of the ideals of mutuality, companionship, intimacy, fidelity, and family. Because it fulfills yearnings for security, safe haven, and connection that express our common humanity, civil marriage is an esteemed institution, and the decision whether and whom to marry is among life’s momentous acts of self-definition.”

What a wonderful reminder to all of us.

After the ceremony, I took Andy and Brian out to the front lawn for a few post vow portraits of just the two of them. I especially like the one with the fist bump. It just goes to show, boys will be boys. Case in point- their wedding cake was actually a sand castle with likenesses of both of them on each tower. After the cake cutting they pitted the two against each other, fighting with them like two 8 year olds with GI Joes.

The reception was just as fun as I thought it’d be. Hysterical toasts, a fabulous slide show, amazing dancing and the most creative, awesome “tosses” I’ve ever seen. The guys had already decided long before that the traditional bouquet and garter tosses just didn’t seem appropriate for their wedding, so they made up their own versions. They decided instead on a blue/pink teddy bear toss for the Straights and a rainbow bear toss for the Gays. Personally, I think this is the way to go. Not only is it awesome to see grown people diving for stuffed animals, but since both Andy and Brian participated in both, there were two chances to snag a bear on each toss. It’s just simple math.
Finally, I’d like to share a few other style points just to round out this epic blog post-
Kyle and Emily, your interpretation of Bohemian Rhapsody was the best I’ve ever seen. You two are amazing. Kyle, seriously, I could watch you dance all night- you rock. I was sorry to hear I left before the hot pink pants came out.
This wedding had hands-down the largest, most well-executed conga line of any wedding I’ve ever been to. Nice job everyone, it was so fun to see everyone out of their seats and getting into the spirit!

Andy and Brian, I absolutely loved the opportunity to share such a special occasion with so many truly awesome people. I can honestly say that even once my job was done at the end of the night, I did not want to leave. Although you’ve both admitted to having the crappiest engagement story ever, I think your wedding story will more than make up for it. 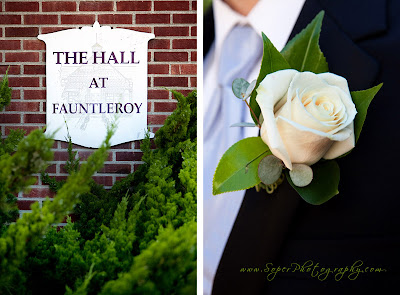 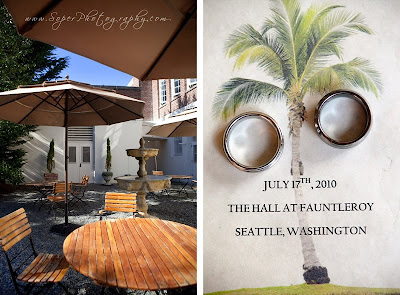 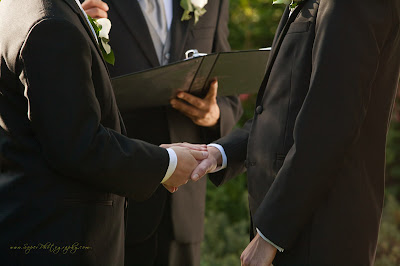 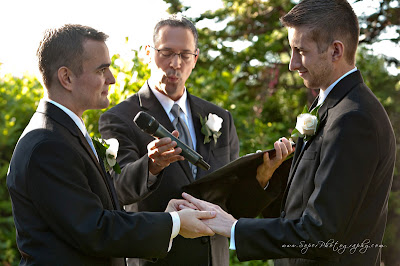 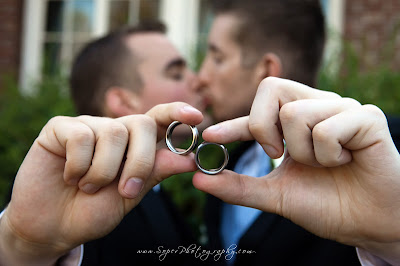 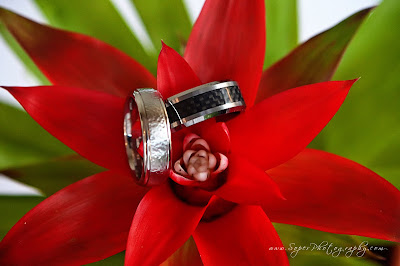 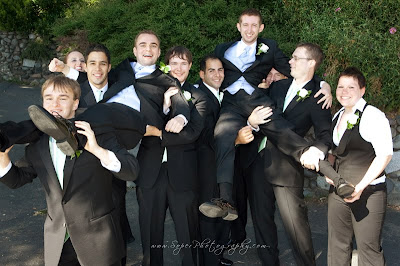 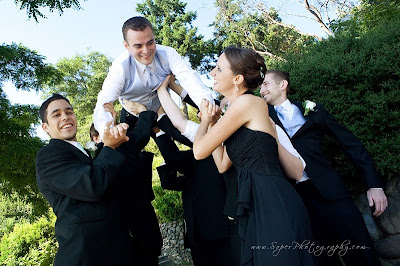 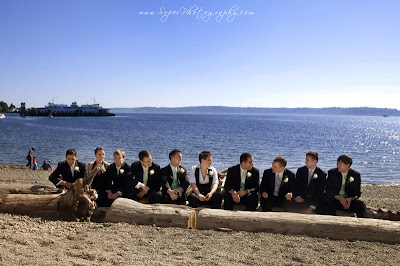 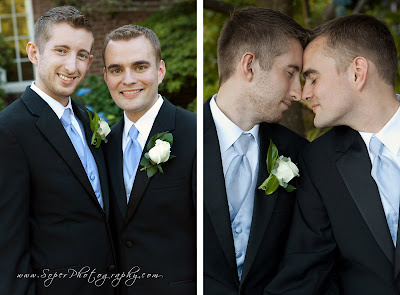 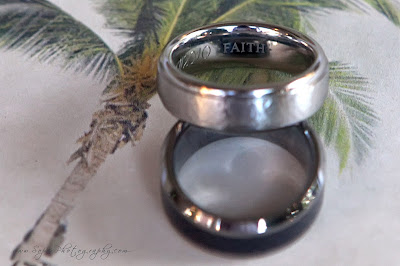 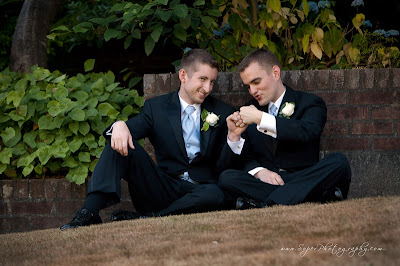 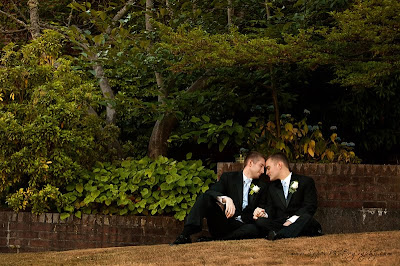 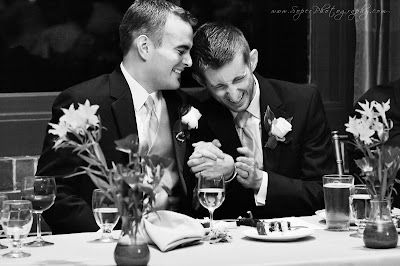 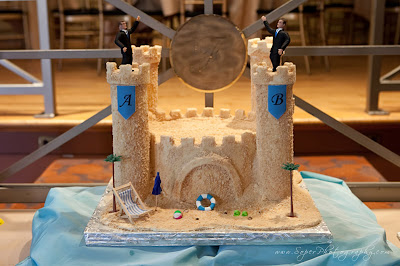 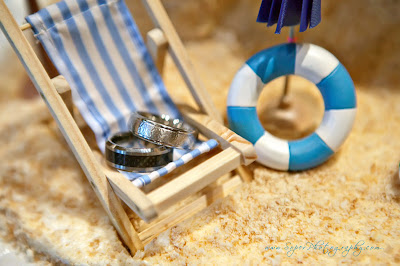 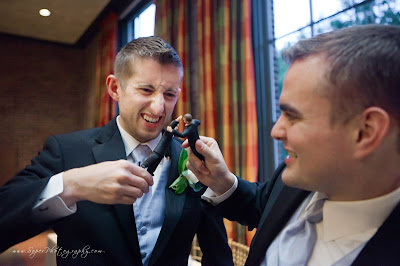 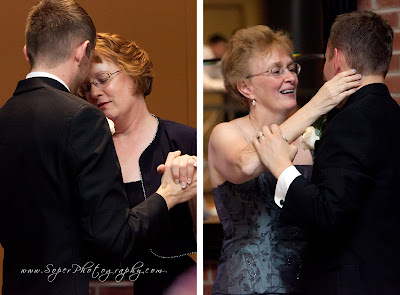 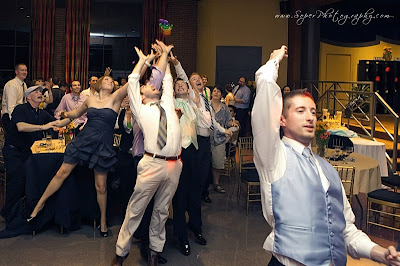 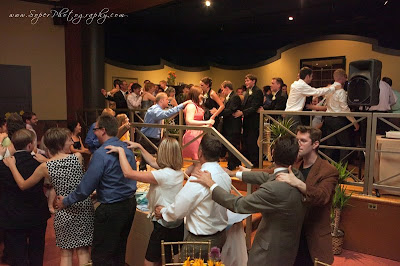 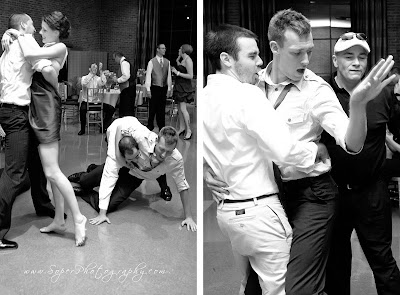 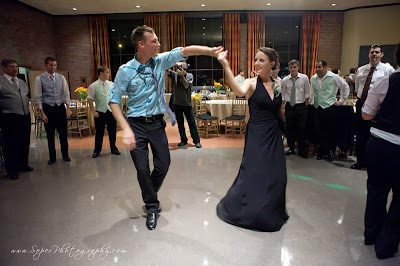 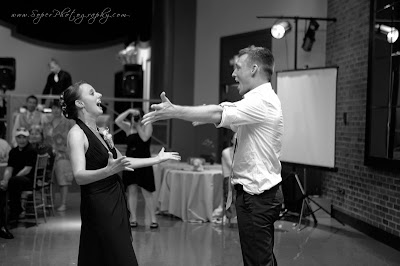 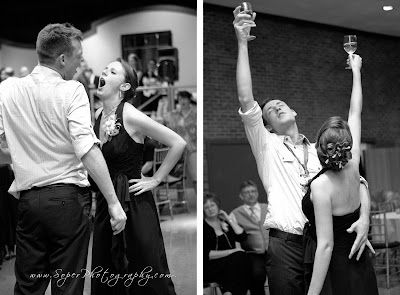 PS… thanks you two for helping me out with the blog title. I actually liked Ambiguously Gay Wedding the best, but thought this one spoke more to the masses. 🙂

**Also as a note to all who are viewing this post, please remember that all computer monitors are not created equal. If the images seem dark, please adjust your monitor. 🙂 Gratzi.**